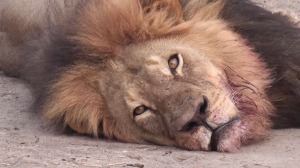 “I’m not opposed to hunting for food our ancestors have always done it. Sport killing is not cool and never has been. Unfortunately Cecil the lion’s death was not a one off and millions of endangered animals are slaughtered for sport each year.

“The reason many species of animals have become endangered is not just from poaching, but because of the encroachment of human development, pollution, deforestation and the blocking of migratory paths which lead to the stifling of gene pools and inbreeding, not to mention the millions of animals killed illegally each year to be sold for profit (for example sharks for shark fin soup). I’ve heard the argument that the money raised from the killing of endangered species helps to support the human communities where the animals live and protect the animals themselves.

“It seemed unlikely to me that the 55k-75k$ paid for similar hunts would actually make it through the hands of for profit hunting companies, and the corruption of government officials around the world into the hands of people doing conservation work. According to Jeff Flocken of the International Fund for Animal Welfare, studies have been done that show only 3-5% of the money being spent on the pricey hunts actually makes it to the ground. The millions from hunts doesn’t compare to the billions each year gained from nature tourism.

“Perhaps we can use this opportunity for all of us to make wildlife conservation across the planet something we show greater support for, so the “Kill some, to save the rest” philosophy can become a relic of the past.”

Like Loading...
Injustice
← What Happens When You Drink a Coke The Truth Comes Out – Mobile/Cell Phones & Cancer →