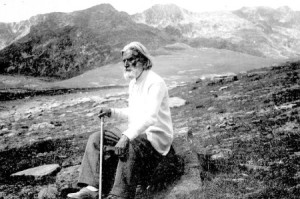 Master Beinsa Douno (born Peter Deunov) was an influential Christian mystic who lived in Bulgaria. He was born in 1886, and passed away in 1944. At a World Theosophical Congress in the Netherlands, Krishnamurti declined to be declared the 20th century incarnation of the Lord Maitreya, telling the participants: “He is already in a physical body on earth. The World Teacher is in Bulgaria and his name is Peter Deunov.”

When Yogananda was asked while visiting Greece about his intentions with regard to establishing an ashram in Bulgaria, he declared, “This is how far I can go, the Spirit of the Truth is active there.”

Beinsa Douno left a prophecy that he obtained through a trance. The prophecy was dated  a few days before his death in December 1944.

“A gradual improvement is already occurring in the thoughts, sentiments and acts of humans, but everybody will soon be subjugated to divine Fire, that will purify and prepare them in regards to the New Era. Thus man will raise himself to a superior degree of consciousness, indispensable to his entrance to the New Life. That is what one understands by ‘Ascension’.

Some decades will pass before this Fire will come, that will transform the world by bringing it a new moral. This immense wave comes from cosmic space and will inundate the entire earth. All those that attempt to oppose it will be carried off and transferred elsewhere. Although the inhabitants of this planet do not all find themselves at the same degree of evolution, the new wave will be felt by each one of us. And this transformation will not only touch the Earth, but the ensemble of the entire Cosmos. The best and only thing that man can do now is to turn towards God and improve himself consciously, to elevate his vibratory level, so as to find himself in harmony with the powerful wave that will soon submerge him.

The Fire of which I speak, that accompanies the new conditions offered to our planet, will rejuvenate, purify, reconstruct everything: the matter will be refined, your hearts will be liberated from anguish, troubles, incertitude, and they will become luminous; everything will be improved, elevated; the thoughts, sentiments and negative acts will be consumed and destroyed. Everything that is around you will soon collapse and disappear. Nothing will be left of this civilization nor its perversity; the entire earth will be shaken and no trace will be left of this erroneous culture that maintains men under the yoke of ignorance.

Earthquakes are not only mechanical phenomena, their goal is also to awaken the intellect and the heart of humans, so that they liberate themselves from their errors and their follies and that they understand that they are not the only ones in the universe. Our solar system is now traversing a region of the Cosmos where a constellation that was destroyed left its mark, its dust. This crossing of a contaminated space is a source of poisoning, not only for the inhabitants of the earth, but for all the inhabitants of the other planets of our galaxy.

Only the suns are not affected by the influence of this hostile environment. This region is called “the thirteenth zone”; one also calls it “the zone of contradictions”. Our planet was enclosed in this region for thousands of years, but finally we are approaching the exit of this space of darkness and we are on the point of attaining a more spiritual region, where more evolved beings live.

The earth is now following an ascending movement and everyone should force themselves to harmonize with the currents of the ascension. Those who refuse to subjugate themselves to this orientation will lose the advantage of good conditions that are offered in the future to elevate themselves. They will remain behind in evolution and must wait tens of millions of years for the coming of a new ascending wave. The earth, the solar system, the universe, all are being put in a new direction under the impulsion of Love. Love is the greatest of all forces! Money and power continue to be venerated as if the course of your life depended upon it. In the future, all will be subjugated to Love and all will serve it. But it is through suffering and difficulties that the consciousness of man will be awakened.

There will be floods, hurricanes, gigantic fires and earthquakes that will sweep away everything. Blood will flow in abundance. There will be revolutions; terrible explosions will resound in numerous regions of the earth. There where there is earth, water will come, and there where there is water, earth will come. God is Love; yet we are dealing here with a chastisement, a reply by Nature against the crimes perpetrated by man since the night of time against his Mother; the Earth.

After these sufferings, those that will be saved, the elite, will know the Golden Age, harmony and unlimited beauty. Thus keep your peace and your faith when the time comes for suffering and terror, because it is written that not a hair will fall from the head of the just. Don’t be discouraged, simply follow your work of personal perfection. You have no idea of the grandiose future that awaits you. A New Earth will soon see day. In a few decades the work will be less exacting, and each one will have the time to consecrate spiritual, intellectual and artistic activities.

The question of rapport between man and woman will be finally resolved in harmony; each one having the possibility of following their aspirations. The relations of couples will be founded on reciprocal respect and esteem. Humans will voyage through the different planes of space and breakthrough intergalactic space. They will study their functioning and will rapidly be able to know the Divine World, to fusion with the Head of the Universe.

The New Era is that of the sixth race. Your predestination is to prepare yourself for it, to welcome it and to live it. The sixth race will build itself around the idea of Fraternity. There will be no more conflicts of personal interests; the single aspiration of each one will be to conform himself to the Law of Love. The sixth race will be that of Love. A new continent will be formed for it. It will emerge from the Pacific, so that the Most High can finally establish His place on this planet.

A new culture will see the light of day, it will rest on three principal foundations: the elevation of woman, the elevation of the meek and humble, and the protection of the rights of man. The light, the good, and justice will triumph; it is just a question of time. The religions should be purified. Each contains a particle of the Teaching of the Masters of Light, but obscured by the incessant supply of human deviation. All the believers will have to unite and to put themselves in agreement with one principal, that of placing Love as the base of all belief, whatever it may be. Love and Fraternity that is the common base! The earth will soon be swept by extraordinary rapid waves of Cosmic Electricity.

A few decades from now beings who are bad and lead others astray will not be able to support their intensity. They will thus be absorbed by Cosmic Fire that will consume the bad that they possess. Then they will repent because it is written that “each flesh shall glorify God”. Our mother, the earth, will get rid of men that don’t accept the New Life. She will reject them like damaged fruit. They will soon not be able to reincarnate on this planet; criminals included. Only those that possess Love in them will remain. There is not any place on earth that is not dirtied with human or animal blood; she must therefore submit to a purification. And it is for this that certain continents will be immersed while others will surface. Men do not suspect to what dangers they are menaced by. They continue to pursue futile objectives and to seek pleasure.

On the contrary those of the sixth race will be conscious of the dignity of their role and respectful of each one’s liberty. They will nourish themselves exclusively from products of the vegetal realm. Their ideas will have the power to circulate freely as the air and light of our days. Under the earth, something extraordinary is preparing itself. A revolution that is grandiose and completely inconceivable will manifest itself soon in nature. God has decided to redress the earth, and He will do it! It is the end of an epoch; a new order will substitute the old, an order in which Love will reign on earth.”

A book about Beinsa Douno, “Prophet for our Times,” by David Lorimer will be republished in September 2015 by Hay House with a foreword by Wayne Dyer.

One response to “The Prophecy of Christian Mystic Beinsa Douno”