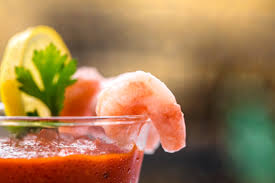 Vice reports on a San Francisco-based startup, New Wave Foods, that has developed, “an insanely realistic faux shrimp made in a lab from algae and plants, and it tastes so much like the real thing co-founder and CEO Dominique Barnes says that people can’t tell it apart from actual shrimp.” Their shrimp has proven to be a hit, and it has been served in Google’s cafeteria and several pop-ups and events in San Francisco.

“We offer a plant-based option as opposed to animal ingredients, and the benefit there is we don’t use hormones or chemicals that are needed to raise animals in confined spaces,” says CEO Dominique Barnes. “You’ll particularly see that with farm-raised shrimp because they really crowd the farms. And when shrimp is imported, there is very little inspection. Also because we’re plant- and algae-based, our shrimp have zero cholesterol. Shellfish and shrimp are high in cholesterol.”

“We looked at the building blocks of real shrimp, what they consumed. They eat many things, but one of the things they eat regularly are micro algae, and a part of that is red algae. Certain compounds from red algae actually impart shrimp’s color and flavor. So we looked at that and found it can actually be cultivated and used in a similar way in our shrimp. It’s also a powerful anti-oxidant.”

“A lot more people are starting to understand that a plant-based diet is healthier for them and healthier for the environment. I think the market is having this shift right now naturally where people are beginning to understand and demand to know where their food comes from—it’s not this rarefied thing anymore. We’re targeting food services first, so that includes corporate dining, but also colleges and universities. In fact, universities are some of the earliest adopters; they’re really progressive in the sense that they’re offering more and more plant-based and vegan meals. All of our ingredients and processes are FDA approved. W are not stopping with shrimp. We are already developing lobster, crab, and fish fillets (salmon, tuna, pollock and more).”

The shrimp will be available to retail stores in California and Nevada in early 2018.