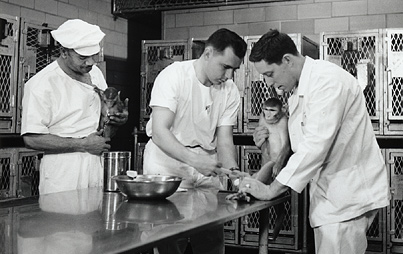 From 1955 to 1963, according to a 1976 US National Institutes of
Health (NIH)-funded study, 98 million Americans alone probably were exposed to polio vaccines contaminated with SV40—a live monkey virus that can cause cancers in animals.

A 2004 report in New Scientist suggested that hundreds of millions of eastern Europeans, Asians, and Africans also may have been exposed to SV40 in Soviet-made polio vaccines.

Basically from 1955 to 1963 nearly every polio dose in the world was contaminated with the monkey virus.

Journalists Debbie Bookchin and Jim Schumacher, who wrote the book The Virus and the Vaccine, note how, “few back then grasped that these vaccines might also be a huge, inadvertent, uncontrolled experiment in interspecies viral transmission.”

Government officials kept the evidence that the polio vaccine contained the virus hidden, so as not to alarm the public. They refused to recall millions of contaminated doses, and the orthodoxy held that SV40 didn’t cause human cancers.

He published his results in Oncogene in May, 1994, but the NIH declined to publicize them. Since 1994, Carbone has written more than twenty studies and reviews investigating SV40’s link to human cancer.

“There is no doubt that SV40 is a human carcinogen,” he says. “SV40 is something you definitely don’t want in your body.”

Studies in Italy, Germany, and the USA also showed associations
between SV40 and human cancers. SV40 had been found in human tumors in 18 developed countries.

The vast majority of baby boomers–almost all of whom received polio vaccine in the late 1950s and early 1960s–have potentially been exposed to the virus.

A study of healthy adults in 1996 found the SV40 virus in 23% of blood samples and 45% in sperm specimens, suggesting that the monkey virus could spread through sexual contact or unscreened blood products.

Rates of SV40-positive tumors seem highest in countries that used the greatest amount of contaminated Salk polio vaccine, including the UK, USA, and Italy.

Bookchin and Schumacher report that since the mid-1990s, SV40 has been found in brain and bone cancers as well as leukemias and lymphomas, in adults and children, with their incidence dramatically rising since the early 1960s.

In 1995 Janet Butel, the chairman of the department of molecular virology and microbiology at the Baylor College of Medicine, in Texas, reported that they had found SV40 in a number of children’s brain tumors. A year later an Italian research team, led by Mauro Tognon, of the University of Ferrara, found SV40 DNA in a large percentage of brain and neurological tumors. The researchers suggested that SV40 may be a “viral cofactor” involved in the sharp rise in human brain tumors.

The NIH hierarchy has been consistently dismissive of evidence that SV40 from vaccines may have caused human cancers.

“For credible epidemiological studies confirming whether SV40 from polio vaccines has caused human cancers, we may have to wait until a new generation is put in charge of the USA’s health research bureaucracy,” noted a review in the medical journal,The Lancet.

Bookchin and Schumacher reveal that Lederle Laboratories, the sole oral vaccine supplier in the U.S. from 1977 onward, continued to produce potentially contaminated oral polio vaccines well into the 1990s.

In The Virus and the Vaccine, the authors examine the case of a previously healthy two-year-old boy who died of brain cancer in 1999.

Knowing he had received the polio vaccine and the learning about the monkey virus controversy, his parents contacted Michele Carbone at the Loyola University Medical Center. He discovered the brain tumor contained the monkey virus and that the child had been exposed to the virus after birth. Both parents were subsequently tested and neither contained the virus.

On his web site Dr. Carbone notes the issue of SV40 and the polio vaccine became very controversial. “The risk of associated litigation that was seen as a major threat by some pharmaceutical companies.”